To understand the present, we have to go back to the beginning of everything… 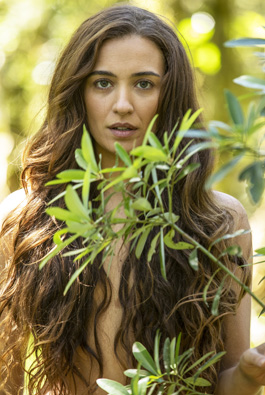 The biblical book of Genesis, in its simplicity and at the same time, its complexity, gives all the answers as to how everything we are, have, see, feel, and touch emerged without further overwhelming our neurons. And this miraculous event is the basis for the telenovela Genesis, the newest Record TV super production.

Genesis is the story of the first 2,300 years of humanity and recounts events exclusively from that period. The plot begins by giving us a greater understanding of why we exist and how we turned from perfection to imperfection. The origin of all social and racial problems is there at the beginning of everything, when via one decision a human being who only knew good and enjoyed it so much also chose to know evil.

Through this choice, we see how the first leading characters, Adam and Eve, paid a high price, which extended to their children, Cain and Abel, and in a short time it spread to all their succeeding generations, making them completely perverted and unjust. If it weren’t for Noah, there would be no one left to tell this story after the great flood that inundated the Earth.

However, with the change of generations there was also a departure from the good customs and principles that God had found in Noah. One of his descendants, Nimrod, not satisfied with all the power and leadership he already had, decided to build the Tower of Babel to reach the heavens and not have to give satisfaction to anyone, including God. And that was how humanity was definitively divided. Peoples and nations of different languages were created.

God then chooses a man: Abraham, son of Terah, from Ur of the Chaldees. And through him and his wife Sarah, a separate generation is formed, far from the city, far from other peoples, and far from the many customs of the time. But why Abraham and Sarah? That is why the story of this pair of protagonists begins well before that call, in Ur of he Chaldees, through the saga of their father Terah.

This family, chosen from among all the others on Earth, continues through Isaac and Rebecca, Jacob and Joseph. We see their conflicts, as well as their wrong and right decisions with all the consequences that come with them.

You’ll be moved, you’ll rejoice, and you’ll even understand the world in a much better way, changing your view on a lot that not only has never been uttered but also has never really been explained anywhere.