Topíssima is a contemporary telenovela that delves into the feminine universe. 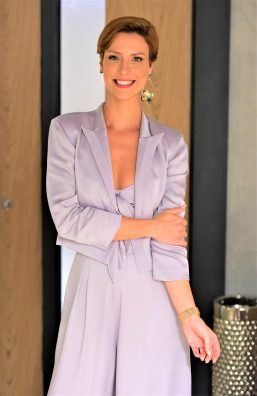 Topíssima brings the struggles of a modern woman to the surface: work versus love life; independence versus solitude; maternity versus career; aging versus aesthetics; illegal abortion versus deaths and countless other questions that involve not just women but also men. Beside issues inherent to the feminine universe, we have an ongoing police investigation full of twists and turns involving the main characters.

As powerful as the sun, the rich and vain Lara Alencar meets her daughter, Sophie, who lives in a luxury hotel on Niemeyer Avenue. Lara wants her daughter to sign a document that forces Sophia to get married in one year in order to keep her newly achieved position as president of the Alencar Group, a wide network of universities inherited by Lara.  Sophia reacts furiously, she is passionate about her job and won´t admit being forced to marry. She is a staunch feminist!

But she has no alternative, after raging out, she ends up signing the document, accepting the condition to marry within a year time. Lara is relieved, she has always been suspicious of her half-brother, Paulo Roberto, who until now was the institution´s president. She has no proof but thinks that he made his wealth by stealing from the Alencar Group. Lara, at first, doesn´t suspect that Paulo Roberto is more than corrupt, but she is wrong…

Many other characters and stories take part in the Topíssima universe. A family devastated by the death of their daughter in a clandestine abortion; young students who must learn to live together in a student republic; a single father who struggles to raise his daughter; the first love of a young couple and the dilemmas related to virginity and love in old age are some of those stories.