The Rich and Lazarus

Which one of them will go to heaven and which to hell? 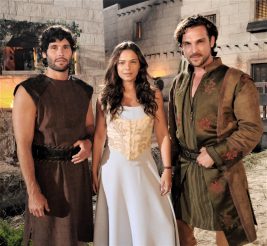 The telenovela “The Rich Man and Lazarus” is based on the story, told by Jesus to his disciples, about two men who die on the same day. One of them goes to hell, and the other to heaven.

Zach and Asher are Hebrews, born with the same opportunities. Which one of them will be thrown in a place of torment and which will be taken to a place of peace after death? What really matters are the choices each one will make during their lives, and this is the story we’ll tell.

600 years B.C., approximately. After the rule of several kings who distanced themselves from God, Jerusalem is immersed in idolatry. The people of God is about to lose everything that Moses and Joshua had conquered.

Babylon imposes it´s power on the entire Mesopotamian region. After defeating the Egyptians, Nebuchadnezzar assumes the throne of the vast empire. During his reign, he transforms his city in the jewel of the ancient world, and builds to his wife, queen Amitis, the legendary Hanging Gardens, and other famous works, such as the Gates of Ishtar, Temples and Ziggurats.

The great friendship between Zach and Asher is hurt by the love that both feel for their childhood friend, the beautiful Johanna

Nebuchadnezzar invades Jerusalem, destroys Solomon’s Temple and enslaves thousands of Hebrews, marking the beginning of the Babylonian Captivity, which will last for 70 years.

Zach and Asher are amongst the captive, and they watch the destruction of their world. Troubled by separations, encounters and losses, their journey will be marked by jealousy, guilt, sadness, danger, vengeance, struggle, sacrifice and, above all, intense dispute for Johanna’s love, which will shake their strong friendship.

The saga of the two friends will feature historic characters and great biblical prophets, such as Jeremiah, Ezekiel, their fantastic prophecies, and, especially, Daniel.

A prophet and an extraordinary man, Daniel is taken to the Babylonian court. After interpreting one of king Nebuchadnezzar´s dream, he becomes the capital’s governor. He will face several enemies in the tumultuous court and live through famous biblical passages, such as the Fiery Furnace, Belshazzar’s Feast and the Lion’s Den, amongst others.

Asher and Zach are characters and witnesses in these historic and biblical moments. It is in this ancient world that they will live their lives and make their decisions, deal with the consequences of their actions, achieve their goals or fail.