A picture of the End of Times 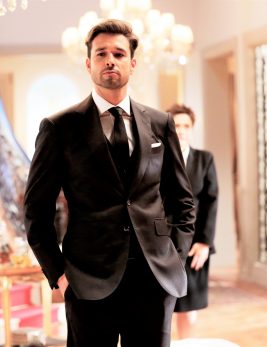 The telenovela involves a story of love, spirituality and redemption in portraying one of the most controversial stories in the Holy Bible: The End of Times.

The story will be told in three phases, the first in the 80’s, the second in the 90’s and the last in the present day. Throughout the plot, apocalyptic prophecies take place in every nucleus of the telenovela: Rio de Janeiro, Rome, Jerusalem and New York, where the fateful September 11th is part of the narrative.

The first phase begins in New York in the 1980s, centered on the meeting of four university students of different nationalities: Alan, the American; Adriano, the Italian; Deborah, the Israeli and Susana, the Brazilian.

Susana and Alan live a delicate relationship that evolves into a beautiful love story. Adriano and Debora are more intense and passionate and, surrounded by a mysterious and somber force, marry in a troubled way and live an unhappy relationship.

The second phase begins in the 90’s with the return of the couple Adriano and Deborah and their son Ricardo to New York, where they resume contact with the old couple of friends Alan, Susana and his son, Benjamin. This reunion happens, despite the envy that Debora nourishes for Susana.

The third phase brings history to the present day. Benjamin is a man of excellent character, who lives a happy marriage with Zoe, the love of his life, and has become a prestigious scientist.

Driven by an unbridled ambition and encouraged by the feeling of envy that his own mother, Deborah, Ricardo will come on the scene to usurp the authorship of revolutionary scientific discoveries made by Benjamin.

He, who has always been in love with Zoe, will use his rival’s studies in a perverse plan of world domination that will bring to light the boy’s identity: the antichrist, the devil’s envoy foretold in the Bible to spiritually destroy humanity.

Faced with the “end”, characters experience moments of faith, sadness, anguish, pain and hope. Apocalypse will have much emotion and commotion until it reaches the Last Judgment.